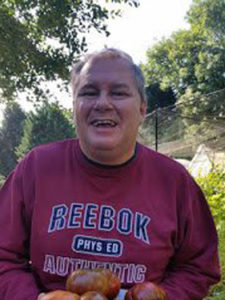 Matthew Cheesman 1968-2018
We are sorry to announce the passing of Matthew Cheesman.
Matthew had been coming to the garden every Friday for seven years. With his big smile and cheerful disposition, Matthew was a joy to have around. He was a very good gardener and he loved to cook – as was also partial to the odd biscuit that we have with our endless cups of tea,
Rushing excitedly up the hill asking what jobs we had to do today he was also very canny. The other month he said he wasn’t feeling very well – this of course had nothing to do with the massive pile of woodchips that had just been delivered, ready to be pushed up the hill!
We like to socialise at the garden and Matthew was really content when after an event we would all sit round the fire with a beer or when we all went to the Bevy Pub for a pint. Him and Pat once got a sharing platter at the Bevy, unfortunately for Pat the only thing Matthew wanted to share was one onion ring. He also had grand plans for turning our cabin into a bachelor pad, with a comfy sofa, stereo and TV.
Matthew loved to cook with Carly and Jo but could come back with some interesting cooking impliments. One time when he was asked to go and get a bowl but he came back half hour later with a golf club !
He got on really well with people, and was a great ambassador for the project often helping show visitors around.
Everyone at the garden has been saying that its not the same without him so later this year we will be creating ‘Matthews corner’ with his own bench and a fruit tree. We are working on finding a chocolate biscuit bush to grow next to it
So thank you Matthew for everything you brought to the garden – it just isn’t the same without you.
previousLOOKING BACK 2017
nextOPEN DAY FRIDAY 20TH JULY