The past year has brought significant developments in our compost-making activities at the .
Because we are endeavouring to grow food crops organically on a particularly challenging soil, with a very thin layer of earthy material above solid chalk, we have a very pressing need for getting as much organic matter into our growing areas as we can.
Back in 2010, we became a recognised Community Composting location as part of a city-wide initiative promoted by and Hove Food Partnership. Local residents and organisations are encouraged to bring their compostable discards to the Project if they are not in a position to make their own, and that is now quite a well-established arrangement. We have regular contributors, usually bringing stuff to us during our open hours, but sometimes leaving boxes or bags mostly of kitchen and catering residues at the gate. So far, the arrangement has worked quite well, and has not faced us with any significant issues or challenges (apart from when we get too many stinky brassica plants).
In March last year, the CommunityComposting Network (CCN), which is the national organisation for England for community composting groups, and the Food Partnership organised a seminar at the Earthship in Stanmer Park for local food-growing groups in the Brighton area. The CCN had obtained major funding from the Big Lottery under their ‘Making Local Food Work’ programme, with a proposal to set up between 12 and 15 ‘Training Hubs’ throughout the country, and ‘expressions of interest’ were invited from groups which might participate. In May we were notified that we had been selected to become the training hub for the area, with Compost John the designated trainer, which gave rise to a certain amount of banter and mirth, as we should expect. Nonetheless, it was an accolade for John and the Project  to be selected, and another little feather in our caps. 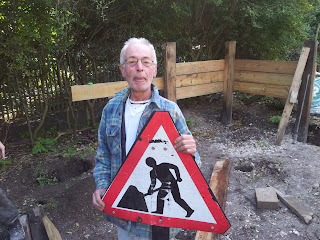 The legendary Compost John
John was despatched to for three days of orientation and training with the eleven other selected groups from around the country, most of which are ‘up North’. We are the smallest project by far to have been selected, the others including such luminaries as Garden Organic at (the old Henry Doubleday Research Association).
During the summer, we were given generous funding by the Prince’s Trust for materials and tools to engage selected school-age young people in the construction of new composting facilities at the Garden, and now at last, after what seems almost an eternity, we are starting to see our new mega compost bins come into being and we have started to make use of them.
There will be six bins in all, arranged along the eastern hedgerow alongside the footpath between us and Moulsecoomb railway station. John reckons that each one will hold about 2 tonnes of lovely rich stuff. One bin is intended to be used for the storage and maturation of the farmyard manure which we buy in periodically; another is for the autumn leaves which we gather each year to make leaf-mould and the other four are for the progressive decomposition of all our garden and kitchen leavings. The first couple of bins are now in regular use and the results so far have been encouraging: our bins heat up very readily (they become ‘thermophilic’ in John’s jargon) and spontaneously become home to impressive numbers, i.e. thousands and thousands, of brandling worms and other earthworm species, all of which seem to co-exist very harmoniously. With a bit more patience and luck, the whole edifice should be complete and operational by Easter. Soon, our ramshackle old bins will be swept away, and the whole area will look much more business-like. We’ll see.
The first three day community composting course was held on three successive Saturdays in November, and was attended by delegates from Common Cause in Lewes, Forest Row Conservation Society, , Fork and Dig It community supported agriculture scheme at Stanmer and Nancy, Adam Beer and Russ Kingston who volunteered to help John with the delivery of the training. very kindly and generously allowed us to use the school premises for the course, because we don’t yet have our own classroom and we need an electricity supply to run computers and PowerPoint presentations. Carly provided lunches and refreshments for everyone. The course material had all been prepared in considerable detail by the staff of the CCN, yes, all three of them; a big chunk of authoritative research and training material. Fortunately, John was only required to deliver it. The course seemed to be very well received by the participants who evidently enjoyed themselves, and feedback from them was very encouraging. In all, eight participants will receive awards from the Chartered Institute of Waste Management, which is the accreditation body for this training, as it counts as ‘continuing professional development’.
Part of our role as a training hub will be to provide continuing support, encouragement and equipment loan facilities to groups which have participated, and the next training course is being planned by the CCN and the participating hubs for May-June this year, once the lessons learned from the first iteration have been incorporated into the course structure and content.
Community composting has been really taking off in Brighton thanks to initiatives from the Food Partnership and neighbourhood groups such as the Beaufort Terrace Community Composting scheme in which was set up and is looked after by our old friend and colleague Simon Parker, very successfully.  John goes round sticking in his six-penn’orth whether wanted or not, as usual. All in all, it’s great for the project to be so involved in such a significant sustainability effort, and best of all, it provides us with a little bit of additional income, and loads of compost for our crops.
Sometimes people ask whether we will be producing compost for sale locally. The answer is that we are trying to achieve the standards for our product which would make it just as good as any that is commercially available, and to make our own seed and potting media, but until such time as we have surplus to our own requirements, it won’t be going out of the gate. 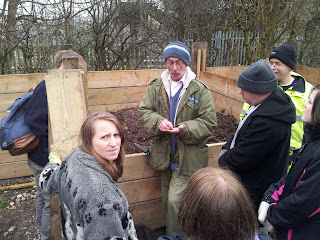