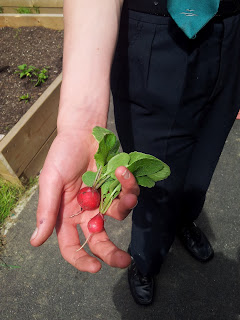 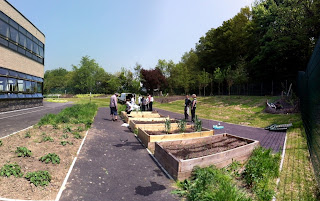 Thanks to funding from the Big Lottery funded Harvest project, we have been working since February on transforming an area at the back of the school with pupils from the Swan Centre. During our weekly sessions we have been building raised vegetable beds with the pupils, planting potatoes and a small herb garden. We have visited Stammer Nurseries where we gave each pupil a small budget to buy plants after doing research on what plants were wildlife and bee friendly. We have had deliveries of soil from the Brighton Community Composting Centre and spoken to the workers about how they produce their compost. We have kept pupils continually engaged with a wide range of tasks from measuring, sawing and building the raised beds to hammering them into place; planting, weeding and barrowing the compost to planting and watering the seeds. We have encouraged pupils to take ownership of the space, do research and come up with ideas such as how to create a wildlife pond. One of the Year 9 pupils asked about getting waterbutts for the plants and we encouraged him to talk to Southern Water. Future plans include putting up a geo-dome for propagating and potting up which will also give us a warm, dry space to work in during bad weather. We plan to extend the raised beds, build a compost bin and a small bog garden while continuing to plant different flowers and shrubs on the bank. We are also working with Brighton Permaculture Trust on enhancing the orchard and soft fruit area and replacing the numerous trees that have died. We have been working closely with Natasha Silsby who has been fundraising to make the above possible. Natasha has also been working on making the Lemon Community Garden a reality. This was a BACA pupil led idea voted the best one in a school competition and we have identified a piece of derelict land at the back of Moulsecoomb Primary where we can put in raised beds, fruit and nut trees, a pond, herb garden and beehives. Natasha is looking for funding to be able to pay for a worker to maintain these gardens and run sessions with pupils from both schools and the wider community to increase food production in the area and people’s skills base. Thanks to funding from the Prince’s Trust, naturalist and author Dave Bangs has produced a woodland plan for Westlain Plantation, the woods behind BACA. We hope the school will come to recognize this space as a fantastic resource on their doorstep, an outdoor classroom that can be used not just as an extension of gardening sessions but also lessons from geography to history as well as an excellent opportunity for the school to work with the wider community. We have also met the city council and developers about planting a small orchard of old fashioned varieties on a piece of land by The Keep, the new historical records centre in north Moulsecoomb. This would be led by Brighton Permaculture Trust who are experts in orchard planning. We want this to be a joint venture between Moulsecoomb Primary and BACA, with pupils planting and looking after the trees with apple days and cooking sessions and a chance to bring history to life, for example by planting the extremely rare and local Stanmer Pippin. At the forest garden we are working with 10 BACA pupils who struggle inside the classroom on a wide range of woodland, gardening, cooking and bushcraft lessons. Five of these pupils now have Open College Network accreditations. We also hope to be running a garden summer holiday scheme to maintain the gardens throughout the holidays and use any produce available. We want pupils that enjoy gardening to be able to take on their own veg bed as well as establish a garden monitor scheme for pupils to help maintain the area. Ultimately, we would like to see the outside space as impressive as BACA’s indoor facilities and one which the whole school has an opportunity to use and be proud of.